Two winners, and one last chance

Hey, I haven’t forgotten you. I have just been trapped in my closet, cleaning. (For those of you who’re always asking how many pairs of shoes I have? The answer is now “not as many as I did yesterday.”) But before I start hauling bags to Goodwill, I owe you winners. 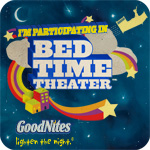 Now, there’s just one awesome GoodNites swag tote prize (filled with $175 worth of goodies—check it out in the first post if you need a reminder) left, and your chance to win it is about to happen right here.

For today’s contest I thought we’d switch it up a little bit; while I certainly advocate the golden rule and kindness in life (and with my kids), the fact of the matter is that sometimes we take a wee bit of pleasure in less altruistic feelings, isn’t it? A while back my daughter was having an issue with a child and became rather obsessed over the idea of revenge (this kid kept getting her into trouble in class, by engaging her and then telling the teacher she was talking/cheating/whatever). I tried to steer her elsewhere for a long time (work it out! try being nicer to her!), but finally I realized it would continue until she put a stop to it. “The next time she does that,” I told her, “I want you to say very loudly ‘Why are you talking to me when we’re not supposed to be talking?'” My daughter said she didn’t think it would work. I suggested she try it anyway.

And she came home the next day all smiles, because guess who got in trouble that day? (Hint: Not my kid.) (Thankfully, that was the end of that particular issue. But I suspect that tiny bit of revenge was sweet.)

So here’s the deal: First go read the contest rules and regulations, then you have until 11:59 p.m. Eastern (8:59 p.m. Pacific) on Wednesday, March 17th, 2010 to leave a comment on this post telling me about some sort of sweet revenge to be entered in this final drawing for a GoodNites swag tote. While you’re at it, don’t forget to check out contest on the Bedtime Theater site, where you stand to win $2,500! I mean, the swag tote is nice and all, but $2,500 sounds even better, no?

It’s another chance to win, and it starts… now.

Disclaimer: I have partnered with GoodNitesÂ® Sleep Pants for the Bedtime Theater program. I have been compensated for my time commitment to the program, which includes developing the Iggyâ€™s Next Adventure story, sharing the program information with my readers, tweeting my blog entry and judging the Iggyâ€™s Next Adventure contest entries. However, my opinions are entirely my own and I have not been paid to publish positive sentiments towards the GoodNitesÂ® products.