So here’s what happened: I got a pitch about a game, and I said I would love to get a Wii version to offer for giveaway. I was told it was on the way, and then I got a package in the mail. Sadly (for us Wii folks) it was not the Wii version, but the Xbox 360 version. Huh. 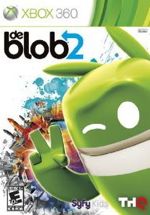 I know a lot of Want Not readers have Wiis, but I have no idea how many of you have Xboxes. I’m thinking not many. But if that’s true, then those of you who do Xbox are about to have awesome odds of winning this contest. What I have is a copy of De Blob 2 for Xbox 360, and it’s an E10+ game where you get to paint the whole world. It sounds kind of soothing, actually, though the reviews lead me to believe even hardcore gamers can take it to a challenging level, while people like me could just be all “Oh, paint! Fun!”

Want to win it? (Um, I’d love for someone with an Xbox to get it, but I see that Amazon is giving nearly $30 for trade-in on this one right now, so… do with that information what you will.) First, go review the contest rules and regulations, then come on back here for this quickie weekend contest and leave a comment on this post by 8:00 a.m. Eastern (that’s 5:00 a.m. Pacific) on Monday, March 28th, 2011 for a chance to win. Winner will be determined by random number generation and ability to say “join the color evolution” with a straight face.