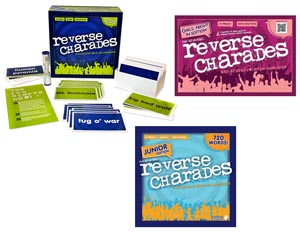 Did y’all used to watch Whose Line Is It Anyway? There was the British version, and then of course Drew Carey hosted an American version. I used to love that show. It made me laugh until I hurt. Today’s giveaway reminds me of that, because what’s funnier than a group of people trying to act out something in a hurry?

The premise behind Reverse Charades is deceptively simple—instead of one person acting out for a group, the group acts out for a single person, and tries to get them to guess as many words as possible during a timed period. Comedy gold, baby! Not only does this mean instead fun for just about any group, it gets everyone laughing and moving. (Can’t picture it? Go here to see people playing.)

For today’s giveaway, you’ll receive everything you need to survive the holiday season and still love the people around you. (Okay, that may be a slight exaggeration. As far as I know they’re not including cookies or wine, but you get the idea.) Today’s lucky winner will receive the original Reverse Charades game, Reverse Charades Junior for the kids, and the Girls’ Night In expansion set.

Want to win all this gaming goodness? Of course you do! First, go review the contest rules and regulations, then come on back here and leave a comment on this post today (Thursday, November 22nd, 2012) by 8:00 p.m. Eastern (thatâ€™s 5:00 p.m. Pacific) for a chance to win. Special for this contest: You may leave additional comments/entries if you like the sponsor on Facebook and/or if you like Want Not on Facebook. (Already like Want Not? You’re pretty. Just leave a comment letting me know you’re already a fan.) That means you can have up to three entries for this one! As with all the contests this week, I’ll pull and announce the winner tonight, and then tomorrow we’ll have our fantabulous conclusion to Big Prize Week with a giveaway that’s going to make you squeal. I promise.