When we last left off, the installation of my new Frigidaire kitchen appliances had hit a small hiccup. And by “small hiccup” I of course mean “possible disaster.” It took five tries, but I now have a flawless range/oven—it’s a thing of beauty. And it’s clear that some of the problems we saw before (like the dent in the door facing) have been fixed at the factory level; the construction is actually different, now. We can see that there’s now a spacer by the door handle that wasn’t there before, and the spacer is preventing the denting that was happening before.

So, yeah, I now have a beeyoootiful oven. I’ve been going about all of my usual sorts of cooking, and enjoying it, sure, but I hadn’t really put this new machine to the test. I’d never said to myself, “Self, what would be a good way to see if this oven really is superior to a conventional oven?”

Well, until this weekend, anyway. This weekend I decided it was time.

Just to remind you, my new stove is this one (you can check out all the specs here). My old stove worked fine, I guess. I mean, it worked. But two things completely intrigued me about this one: First, that it can be used as a conventional oven or as a convection oven, and second, that it has this Fits More design with four racks.

Surely you couldn’t actually use all those racks at once and have it work properly… right?

Well, this is where the beauty of the convection oven comes in. That circulating hot air is like magic. And I know that because… 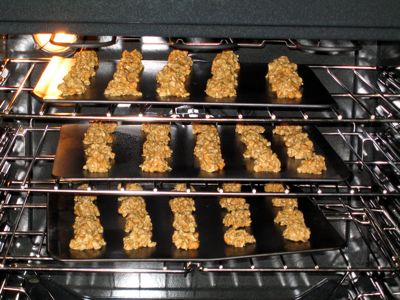 … I decided to bake a billion cookies. At once.

And yes, I could’ve put another cookie sheet in there, too. But I only have three cookie sheets.

You know how in a regular oven, you can do two cookie sheets at once, but you have to switch them halfway through baking so that they cook evenly? I never switched these. They just… baked. Magically. 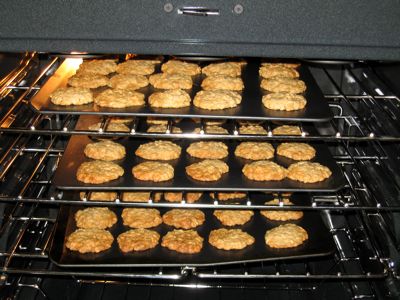 Of course, I don’t usually make this many cookies at once, but last week during The Great Dog Chase a lot of our neighbors were extremely helpful and went out of their way to try to help us catch the dog (no, we still haven’t caught him), so I thought that called for cookies. Because nothing says, “We’re sorry about the feral dog and really appreciate the fact that you sometimes tossed him some food” like oatmeal butterscotch chip, right? Right.

Anyway. Back to the stove! In eight minutes, I had five dozen perfect cookies. 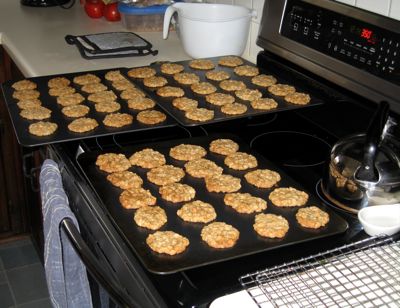 The kids were the taste-testers. They said they’re as good as they look.

And another eight minutes later I had another five dozen cookies. And later on I hopefully had some less-annoyed neighbors. Ahem.

Now: Is it a big deal to have to move the cookie sheets around while baking? I guess not. It’s annoying, but hardly a huge inconvenience. On the other hand, just being able to put the food in the oven and forget about it until the timer goes off is really, really nice.

After the cookies were done I roasted a bunch of tomatoes and red peppers and onions and made soup. I didn’t take pictures of that, because roasted soup veggies sort of look like glop, but the resultant soup was out of this world delicious. Maybe not as pretty as fifty billion cookies, but very yummy.

In short, I’m digging my new oven in a serious way.