Protection and pizzazz for little hands

I know I owe you a winner from last week’s contest, and I promise to get to that later, but I wanted to get this contest up before I have to run out for a while. (These darn kids, man. So demanding! Drive me to the orthodontist, Mom. Feed me, Mom. Sheesh.) 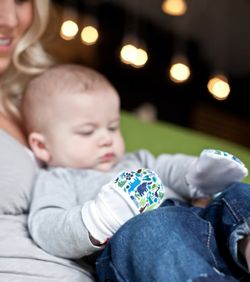 Anyway! Check out what I got in the mail last week. No, not a baby (I think my husband might take issue with that sort of thing…). Check out the baby’s hands. He’s wearing GuavaMitts, from GuavaKids, which is so new that they’re only just getting set up online. (Until their site opens, you can check them out on Facebook and Twitter, if you’re so inclined.)

So you’re thinking… baby mitts. Big deal. But actually, these are a big deal. First, they’re made of bamboo and organic cotton. Nice! Second, they have velcro closures on the wrists, so that may make them the first baby mitts that baby can’t flail off his little hands. And finally, they’re reversible, with an eye-catching color print on one side and brain-stimulating black-and-white pattern on the other. The pair I have to give away has sort of a mod green print on one side, and black/white circles on the other.

Want to win ’em? Of course you do! First go review the contest rules and regulations, then come on back here and leave a comment on this post by 8:00 a.m. Eastern (that’s 5:00 a.m. Pacific) on Thursday, September 1st, 2011 for a chance to win. Winner to be determined by random number generation and how many scratches your poor baby has on his face already. But mostly the random number thing.