I brought you a geekalicious souvenir

To make it up to you for being gone and neglecting you for a few days, I brought you back something. Because I love you. (And because I got it while I was at Save Up and it’s PC software and I have a Mac.) (But mostly because I love you!) 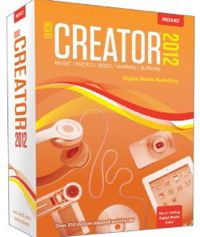 Roxio Creator 2012 appears to be everything you need to edit video on the fly, create slideshows, convert media from one device to work on others, add special effects, capture TiVoed shows for later, etc. Like I mentioned, it’s not for Mac users, but for everyone else, it looks pretty sweet.

You could totally get your geek on with this software, is my point. And if you’re here, chances are that sounds pretty appealing. (Or—if it doesn’t appeal to you—possibly you have a tween or teen who would be all over it.)

So. Want to win it? Of course you do! First go review the contest rules and regulations, then come on back here and leave a comment on this post by 8:00 a.m. Eastern (that’s 5:00 a.m. Pacific) on Thursday, October 20th, 2011 for a chance to win. I’m finally moving into the current century and installed a special plug-in for contests that will supposedly pick the winner for me when it’s over, so that’s how that’ll work. I hope.

Well, what are you waiting for?