Those of you who were around last year may remember that I decided to count down to Black Friday with a wild week of contests. This year we’re doing it again, and I think you’re going to find these five days of prizes will make it worth your while to stick around. 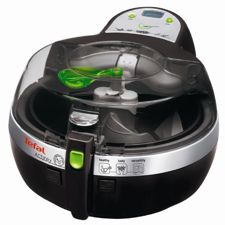 T-Fal had their nice PR folks reach out to me about a month ago about their ActiFry, which I first looked at and wondered if it might double as a space ship in a pinch. There’s no denying it’s a weird-looking apparatus. But there’s also no denying that it does exactly what it says: Through a combination of pulsating heat and a rotating paddle, it automatically produces lower-fat versions of your favorite either traditionally fried or tremendously fussy (hint: risotto!) dishes while you go do something else.

(Confession: Here’s how the rep piqued my interest—she said, “You can make 2.2 pounds of french fries with just a tablespoon of oil!” My immediate response: “No way!” I take french fries seriously, people.)

So I received an ActiFry to test out, and of course the very first thing I did was make fries. (Obviously.) They were delicious, and unlike every batch of oven fries I’ve ever made, they were perfectly cooked on all sides and didn’t stick to the pan. The children announced they wanted fries with dinner every night. Much to their dismay, in the following days I made a variety of roasted vegetables (not fries), just because I am mean. My favorite so far is roasted sweet potatoes home fries, which we had with a frittata one night. Again, they were perfectly cooked, didn’t stick, and used much less oil than I would normally need to cook them either in a pan or in the oven.

In short, I’m an ActiFry convert. I’m not sure I ever would’ve purchased one (they’re pricey), but now that I have it, I use it a few times a week. Thumbs up!

Want to win one? Of course you do! First go review the contest rules and regulations, then come on back here and leave a comment on this post today (Monday, November 21st, 2011) by 8:00 p.m. Eastern (that’s 5:00 p.m. Pacific) to be entered for a chance to win. All contests this week will run for one day and one day only; you snooze, you lose.