Weekly contests have been on hiatus here at Want Not for a bit, but I think it’s time to resume. And as many of you know, the start of the new year has been a rather rocky one for my family, so what better way to bring back the contest love than with the king of annoyance himself, Annoying Orange. My son thinks Annoying Orange is fabulous. I think Annoying Orange is… kind of annoying. But in an entertaining way, which is why I couldn’t say no when these items were offered to me. 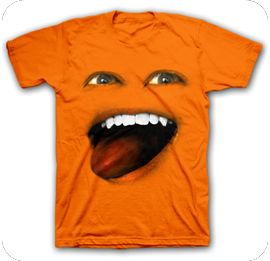 Guess what I have for you! A men’s size large Annoying Orange shirt. Suitable for use as a nightshirt by smaller creatures, or perfect for the man who truly wants to walk around wearing an anthropomorphic fruit on his chest. I don’t judge. As a bonus, you’ll also receive a Midget Apple talking clip-on, which says things like “Not cool, man” and “I prefer LITTLE Apple, thank you very much!” when you squeeze him.

Basically, this is an equally good gift for an Annoying Orange enthusiast or someone you really don’t like. Your choice!

Want to win this fabulous pair of prizes? Of course you do! First go review the contest rules and regulations, then come on back here and leave a comment on this post by 8:00 a.m. Eastern (that’s 5:00 a.m. Pacific) on Thursday, January 19th, 2012 to be entered to win. I’ll use my handy-dandy random comment picker plug-in to determine the winner.

I have the talking apple here on my desk and I’ve been making it say stuff for the last hour. My daughter is now begging me to give it away. Heh.

What are you waiting for? Go!