Good morning! It’s a new day, and a new chance to win some goodies. Are you excited? I’m excited. (I’ve had some coffee….) And today I have two prizes guaranteed to delight the kids, while you can rest easy knowing that they’re actually learning while they play, too.

First up: Meet Strictly Briks, a building system compatible with… well, that other brick system you know and love. I have here in front of me the AlphaBriks & MathBriks set, which includes the 10 x 10 baseplate, 200 letter and number tiles, and a handy little bag for containing all the tiles when playtime is through. Your favorite kiddo can write, practice math, or simply build whatever they like. And of course—as with all Strictly Briks toys—it’s fully compatible with any other brick-building sets they already own, so they can mix and match to their heart’s content. 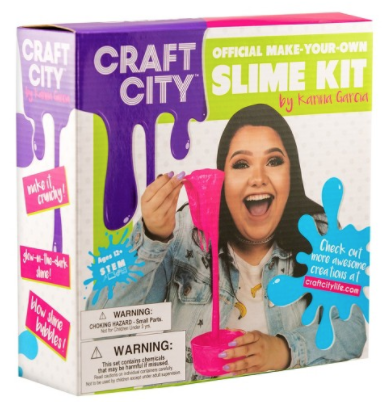 I’ve also got an offering from Craft City Life, their DIY Slime Kit, the answer to your child(ren)’s incessant whining for you to buy gallon after gallon of Elmer’s glue.

This kit contains everything you need to make slime without making a mess! Hahaha! Just kidding! They’re kids, and it’s slime, so it’ll probably still be a mess. But a really fun mess, and you’ll never find yourself halfway through the process and missing an ingredient. Not that that’s ever happened to me. Ahem.

Alright! Ready to win either the Strictly Briks or the Slime kit? Of course you do! First, go review the contest rules and regulations, then come on back here and leave a comment on this post today (Tuesday, November 21st, 2017) by 10:00 pm Eastern (that’s 7:00 pm Pacific) specifying which prize you want for a chance to win one. Two (2) winners will be pulled (using my fancy contest plugin winner-picking thingie) and announced tonight, and then we’ll be on to the next giveaway. (Also, FYI, I think for the rest of the week I don’t have rehearsal, so I can shift the contest window back a little earlier.)