Today I am thrilled to bring you a review of the Cuisinart ICE-30BC 2-Qt Automatic Frozen Yogurt, Sorbet, and Ice Cream Maker courtesy of Abe’s of Maine and Savings.com. As a Savings.com DealPro I was offered the opportunity to both receive an ice cream maker for my own use and to offer one to all of you as a giveaway. Per FTC Guidelines, I always disclose when I’m reviewing product I received for free, but per Mir guidelines, I will never share anything other than my honest opinion and experiences with said product. Pinky swear. And if you read to the end, there’s a chance for you to win one! 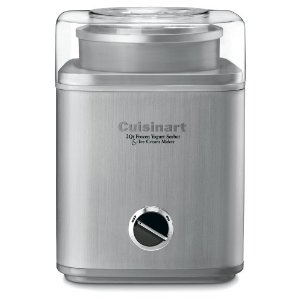 Some people look a gift horse in the mouth. Me, I try to give the gift horse back. When I was offered the chance to get my hands on two of these ice cream makers, I said, “Oh, but I already have an ice cream maker. I just want one to give away.” See, I already own the Cuisinart ICE-20, an earlier and less fancy version of this machine. But The Powers That Be insisted that they wanted my opinion on this machine, so I agreed to test it out anyway, even though I thought it was sort of dumb because I already love the machine I have.

First, let me tell you about what’s the same between the ICE-20 and the ICE-30BC. Both machines feature a removable chill bowl that gets placed in the freezer overnight or—if you’re like us—just lives in the freezer so that you can just declare it a good time for ice cream whenever and pull it out and use it immediately. I think most modern electric ice cream makers have a chill bowl like that, now, but if you’re still using something that requires you to add ice and salt, consider upgrading, because it makes everything very easy.

Another nice feature of the Cuisinart machines is that the dasher (that’s the paddle-thingie) is absolutely fool-proof. I tell you this because I used to own a Krups ice cream maker in which I—not tooting my own horn, here, just saying that I hold a post-graduate degree from a pretty fine institution of learning, and therefore I don’t really consider myself a fool—regularly managed to misalign the dasher. Don’t ask me how I did it, but I had a lot of trouble getting it placed correctly so that it would work. In both Cuisinart machines I’ve tried the design is the same, and that design is “the dasher cannot be placed into the bowl incorrectly.” I mean, I guess you could put it in upside down, but short of that, it’s fool-proof.

And finally, both machines are powerful (my sensory-sensitive son is not a fan of the steady growl of the motor as it churns) and have a nice big opening at the top through which to pour ingredients. They’re both very user-friendly.

Now. What does the ICE-30BC offer that my old maker doesn’t? I set out to find out, and even though I generally consider the Ben & Jerry’s Cookbook my “ice cream bible,” I had a hankering to try something else. I’m kind of on a ginger kick, so I decided to try this ginger ice cream recipe. It had a lot of steps, and involved things like tempering eggs, so it means I really love ginger you that I decided to try it. Ahem.

I set up the new machine on my counter and yes, I’m shallow, but the brushed chrome and squared-off design just look a lot prettier than my old white machine. (It goes with my blender and my mixer! Shiny!) Also, the ICE-30BC has a little self-storage well you can tuck the cord up into when the machine isn’t in use, and while I’m certainly not going to base a purchase decision on a tiny little detail like that, it’s just a nice thing to have, particularly if you (like me) have a giant cabinet where the small electrics live and you don’t want to be detangling cords every time you get one out.

Also, the new machine is mostly metal, with the bowl sitting down inside of it and a plastic lid on top, whereas with the ICE-20, the bowl basically sits on a base and is completely encapsulated with a large plastic cylindrical dome. To Cuisinart’s credit, even in my messy cabinet, the cover never ended up cracked, but I always kind of worried about it. The ICE-30BC just feels sturdier and there’s less plastic to worry about.

So how did my ice cream come out? Just like my other machine, the new one made creamy ice cream in under half an hour. Yum. And as I sat there waiting for it (and maybe sneaking a taste or two while it churned; I am admitting to nothing) and reading the product manuals, I realized I’d made the wrong ice cream. See, the Cuisinart ICE-20 has only a 1.5 quart capacity. The ICE-30BC can hold 2 quarts. For my ginger ice cream—less that a quart yield—it didn’t matter. But most of the recipes in the Ben & Jerry’s cookbook yield 1.5 quarts. Which means that if someone decided that hey, Cherry Garcia would be even better with more cherries, you end up with a Cherry Garciasplosion as your faithful ice cream maker churns it up and out of the machine. (Uh, not that I’ve ever done that, of course….)

Also, I just realized I have no pictures for you. Possibly because I was making ice cream while folding laundry and playing with the dog. I mean, not all at once, but inbetween each ice cream step I folded some stuff, threw the ball, etc. Sorry about that.

Bottom line: I doubt I would’ve upgraded on my own, given that my old machine works fine, but I’m pleased as punch with my pretty replacement, particularly because it has a larger capacity. If you were looking for an ice cream maker, you could do a lot worse than the Cuisinart ICE-30BC, I’m thinking. It’s foolproof, it’s slick-looking, and it has a bigger bowl than most other models. Perfect.

Speaking of which… how would you like to win one? Abe’s of Maine is going to send a Cuisinart ICE-30BC to one lucky Want Not reader! Want to win it? Of course you do! First go review the contest rules and regulations, the come on back here and leave a comment on this post by 8:00 a.m. Eastern (that’s 5:00 a.m. Pacific) on Thursday, March 17th, 2011 for a chance to win. I’ll choose the lucky winner via random number generation and ability to name all 31 flavors. (Kidding about that last part. Please don’t. Especially seeing as how one of my kids is currently memorizing Pi to 100 places and I have to listen to that all day long….)