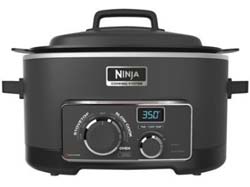 About a month ago I was contacted from the nice folks from Ninja, wanting to know if I would be interested in trying out their 3-in-1 cooking system. I couldn’t say yes fast enough—as a long time slow cooker addict (and huge fan of Stephanie O’Dea, crock cooker extraordinaire who sings their praises), I had been intensely curious about this supposedly do-it-all machine… though not quite curious enough to pony up $200 for one (especially because I already own four crock pots). (Oh, stop looking at me like that. I use them all! Regularly! I can stop any time I want to.)

Anyway, my Ninja arrived and I decided I would take it for a spin by trying to do some things you can’t do with a traditional slow cooker. The Ninja can function as a regular slow cooker—and does so just fine, with low, high, and keep warm settings, as well as a programmable timer (side note: a couple of my crocks aren’t programmable, but having a machine that automatically flips to warm after the prescribed cooking time is awesome)—but it can also work as a roaster or even kind of like an electric skillet. Ah! I decided to make tom ka gai (a Thai coconut chicken soup I love), because my recipe calls for sauteeing of oil and spices and then mushrooms before everything can go into your crock pot. Ordinarily I skip any crock recipe that requires me to dirty another pot beforehand (think “brown the meat” and other such directives; either I just skip it or move on to another recipe). To me, the main appeal of crock pot cooking is only getting one pot dirty.

I put my Ninja on the requisite “stovetop” setting and did my sauteeing in a snap (it heats up really quickly). Then I flipped it over to “slow cook,” added my other ingredients, and let the soup go for another five hours or so. It was delicious (and my house smelled good all day—another reason to use a crock pot!) and I only got one pot dirty.

A few days later I slow cooked a batch of dried beans in it, and when it was done I decided to make my bean dip recipe in the cooker instead of spreading it all in a pan and putting it in the oven. It worked great, and had the added bonus of being a lot easier to clean the pan that goes in the oven. (The Ninja cooking vessel is non-stick, and cleans up much better than the ceramic crocks in my other cookers. You know how a conventional crock gets a weird white film in it when you cook beans that never seems to come off no matter how much you scrub? No such problem in the Ninja.)

According to the booklet that came with it, I can insert the included rack and then steam bake a cake inside of this sucker, if I want to. I haven’t tried that yet, but once Summer rolls around and I’m reluctant to turn the oven on I may try. Something I will be doing, though, is using the Ninja at Thanksgiving. I typically use all of my slow cookers on the big day both to free up the oven for the turkey and free up me for hanging out with our guests—I can put most of our sides in the cookers early in the morning and then not worry about them for the rest of the day. The one side that breaks my one-pot rule this way has always been the mashed potatoes; I have to make them on the stovetop, then transfer to a crock. But I think I can make them directly in the Ninja this year. I’ll have to report back and let you know.

Bottom line: I really like the Ninja for being everything a slow cooker should be, as well as expanding functionality to eliminate extra pots and even step in as an oven substitute.

This is the part where I remind you that I received my Ninja for free, but all opinions are my own. This is also the part where it would be super fantastic if I told you that I have one to offer up to all of you. But… will you throw things if I ask you to be patient? All I’m saying is that it’s nearly Thanksgiving, which means Big Prize Week is coming up. So maybe you should just make sure you’re around next week, is all I’m saying.